The Roto Grip Idol has hit a saturated market for high-performance, hook-heavy bowling balls with a lot of fanfare. Our Roto Grip Idol review will give you an in-depth look at this aggressive new bowling ball, highlighting both its advantage and disadvantages to leave no part of your potential purchase decision to chance.

How exactly is that possible? In short, the cover stock’s Nano technology ups the traction quotient and adds a new level of aggressiveness over past Roto Grip offerings.  Coupled with the new symmetrical core, the aggressiveness of the cover stock is less tempered and more framed. It’s an interesting combination which completely turns the symmetrical core concept on its head.

For a heavy oil bowling ball, the Roto Grip Idol still does a fantastic job when oil patterns start to deplete. It’s breakpoint motion, while angular, is extremely continuous and leads to a powerful back-end reaction thanks to the energy-saving capacity of the symmetrical core design. This ball tracks well enough to be considered versatile, even if you shouldn’t be pulling it out of the bag for drier conditions.

The Roto Grip Idol can be a little bit hard to handle if you’re not used to tempering early motion. It sports great mid-lane length regardless of its early energy kick, but you’re going to need a steady hand and your thinking cap to extend the lane length of the Roto Grip Idol. There’s so much aggression to be had here, so you’ve gotta be a quick thinker and willing to adjust.

The Roto Grip Idol’s MicroTrax-S18 Reactive Solid cover stock is extremely durable for having such inherent powerful, aggressive reactivity. It takes a beating but still delivers the goods through repeated plays and heavier oil patterns.

The brand-new Ikon symmetrical core does almost the exact opposite of what you’d expect a symmetrical core to do. Rather than temper the Roto Grip Idol’s wilder impulses, it actually augments them in a way which adds even more violence at the breakpoint and at the back end.

The great thing about the Roto Grip Idol’s 2000 Grit Pad finish is that it’s rough enough to give you solid traction through medium and medium-heavy conditions, but it’s slick enough to offer lane length where other finishes would prohibit it.

The MicroTrax-S18 Reactive Solid cover stock is built to withstand normalized wear and tear, along with some of the more troublesome variances you’ll find with lane conditions. That’s a huge benefit for such an aggressive cover stock, as most cover stocks with this type of potential are extremely delicate and require constant care.

The fired ceramic Ikon symmetrical core is an example of energy-storing capability at its finest. It’s perfect calibrated to conserve firepower for back-end reactions you could only dream of with other bowling balls.Advantages & Disadvantages

If you’re looking for powerful angularity and fiery back-end reaction s coming out of the heaviest of oil patterns, you’re going to love the Roto Grip Idol. Don’t let its symmetrical core fool you – this ball can catch some wild angles headed into the pin pocket! The more oil this ball absorbs, the wider array of different impacts and pocket entries you can get.

The thing that separates the Roto Grip Idol from other company offerings is that its aggressiveness is framed by some impressive lane length and continuation of motion. This ball has a violent reactivity, but it’s easy to track within that violence and keep the ball slotted towards the pocket. That’s a rarity with any high-performance bowling ball.

Conservation of energy is critical for aggressive bowling balls. If energy is displaced and expended too soon in the pattern, you’re risking some very tepid reactions on the back end. This ball conserves a ton of energy for being so wild. It’s almost paradoxical, but it’s a welcome balance to be sure.

If you’re looking for a strike ball to really get the most out of fresh oil conditions, keep the Roto Grip Idol on hand. This ball attacks fresh patterns with zeal, firing through the oil and creating some unforeseen traction opportunities. This ball keeps most of its fire when the oil patterns start to deplete, so you won’t have to worry too much.

As with the majority of high-performance bowling balls of this ilk, do not bring the Roto Grip Idol to lanes which average drier or medium-dry. You may not exactly ruin the cover stock, but you’re going to get absolutely no benefit out of this ball without oil to burn.

If you’re not used to bowling balls which dial up aggression to its physical limitations, you’re going to have a hard time taming the Roto Grip Idol. Not even the ball’s symmetrical core will work in your favor if you’re unable to read and respond to the Roto Grip Idol’s extreme sensitivity.

Early motion is a big part of the Roto Grip Idol’s cache. If you’re used to saving a lot of your hook for farther down the lane, you’re going to struggle to adjust to this ball’s quick reactivity. It’s a lot to handle right out of the gate, so be prepared.

The Roto Grip Idol does exactly what it sets out to do. It pushes the limits of aggression to new heights while offering some unique nuances thanks to its symmetrical core design.

The extreme reactivity of this ball requires the bowler behind it to have the skills to put it to good use. However, such a bowler is going to have an absolute blast playing with the Roto Grip Idol once they get it on track. 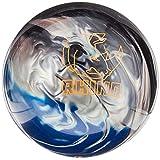