The Storm PhysiX bowling ball is Storm’s newest addition to their crowd-pleasing Premier line. Our Storm PhysiX review will look at this hook-heavy bowling ball from every possible angle, giving you a detailed look before potentially making a purchase decision.

Is this ball too aggressive for its own good or is it just right? Should you save the Storm PhysiX for heavy-oiled lanes or is there enough versatility present for a variety of lane conditions? Delve into our in-depth Storm PhysiX bowling ball review for the answer to those questions and more!

If you’re familiar with Storm’s cache of high-performance bowling balls, then you’re already acquainted with the highly-aggressive NRG Hybrid Reactive cover stock. However, the ball’s depth of reactivity and nuance has been changed with the addition of a brand-new Atomic asymmetrical core.

While this core lines up almost perfectly with the preceding RAD-X core when it comes to RG, intermediate differential, and total differential, its pairing with the NRG Hybrid Reactive cover leads to some smooth yet powerful reactions – especially when the ball is played in fresh and heavy-oiled conditions.

The great thing about the Storm PhysiX is that its smooth breakpoint reaction and undeniable overall power makes it a perfect fit even when heavier oil patterns start to break down. In fact, this ball still has a powerful sweeping hook and an enormous back-end reaction when played on medium-oiled lanes. There is undeniable versatility to the Storm PhysiX which will keep it in your bag in varied conditions.

While the preceding Storm Sure Lock had a bit more total hook due to an earlier reaction and a more prominent continuation down the lane, the Storm PhysiX makes up for that with a bit more energy-storing capacity within its new core design. When you slot the Storm PhysiX just right into the pin pocket, expect violent pin impact and a notable increase in your strike count.

The return of Storm’s NRG Hybrid Reactive cover stock creates a much smoother reaction at the breakpoint than other bowling balls in the company’s Premier line. Some may love this cover stock’s fluidity while others may lament its muted sharpness and angularity at the breakpoint.

The dull 3000 Abralon finish on the Storm PhysiX creates earlier traction in the heaviest of oil patterns. Combined with the ball’s cover stock, hook-heavy bowlers will love how this ball creates friction even when submerged in fresh oil conditions.

The NRG Hybrid Reactive cover stock on the Storm PhysiX is extremely porous and is built for the heaviest of oil patterns. However, the trade-off is that the ball’s pores get gummed up pretty quickly unless you’re diligent about cleaning your ball after every use. If you want to maintain peak reactivity and get all the hook potential you can out of the Storm PhysiX, you’ll need to clean this ball constantly.

There is a ton of nuance and craftsmanship which went into the construction of the Storm PhysiX’s brand new Atomic asymmetrical core. It feels a bit lighter than the preceding RAD-X core from the Storm Sure Lock. However, it may have a bit more punch thanks to its energy-storing capacity.

The Storm Premier line is known for its heavily-reactive hook monsters. The Storm PhysiX keeps that reputation going while adding some key new strengths which differentiate it from other balls in the Storm oeuvre.

Thanks to the return of the NRG Hybrid Reactive cover stock, the Storm PhysiX tends to play smoother and offers more control in fresh oil conditions and on sport patterns. When there’s a ton of oil up front, the Storm PhysiX eats through it with ease and stores it as energy for a fiery back-end reaction.

The great thing about the Storm PhysiX is that it also has the versatility to completely blend out over/under reaction on medium and medium-heavy oil patterns. This is especially useful as the patterns start to break down. The Storm PhysiX offers a powerful balance of lane length and violence in these conditions which makes it unique compared to other high-performance balls we’ve tested.

There are so many hook possibilities available with the Storm PhysiX that it truly lives up to its namesake by defying the normalized physics of high-performance bowling balls. No matter how you approach, the Storm PhysiX is capable of finding a groove and delivering consistent hooks with violent pin trajectories and pin carry at the back end.

The Storm PhysiX will be polarizing for many hook-heavy bowlers due to its effortless, smooth reaction at the breakpoint. If you’re looking for dynamite reactions with sharp angles, you’re going to be disappointed with the almost muted consistency of the Storm PhysiX down lane.

The ball is also noticeably slower down the lane than the preceding Storm Code X, especially as oil patterns start to break down and its source of energy begins to deplete. The Storm PhysiX clears the fronts with ease, but it sometimes feels a bit stuck as it travels down lane in advance of its back-end reaction.

Do not use the Storm PhysiX in dry or even medium-dry conditons. Such conditions will both zap the ball of all of its innate power and could end up damaging the ball’s cover stock with repeated use. This ball was crafted for oil, so be sure to keep it in the bag when there’s not much oil to be had on the lanes.

The Storm PhysiX is a worthwhile addition to the company’s Premier line, albeit not a complete blockbuster. It’s smooth breakpoint reaction won’t be for everyone. It slots in nicely between the other balls in the line, but doesn’t necessarily rewrite the book in such a way as to necessitate an investment if you already own another Premier line ball.

What the Storm PhysiX does, it does extremely well. It’s not quite a game changer but it portends huge things to come as Storm continues to tweak its formula. 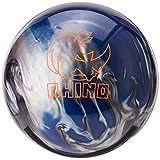